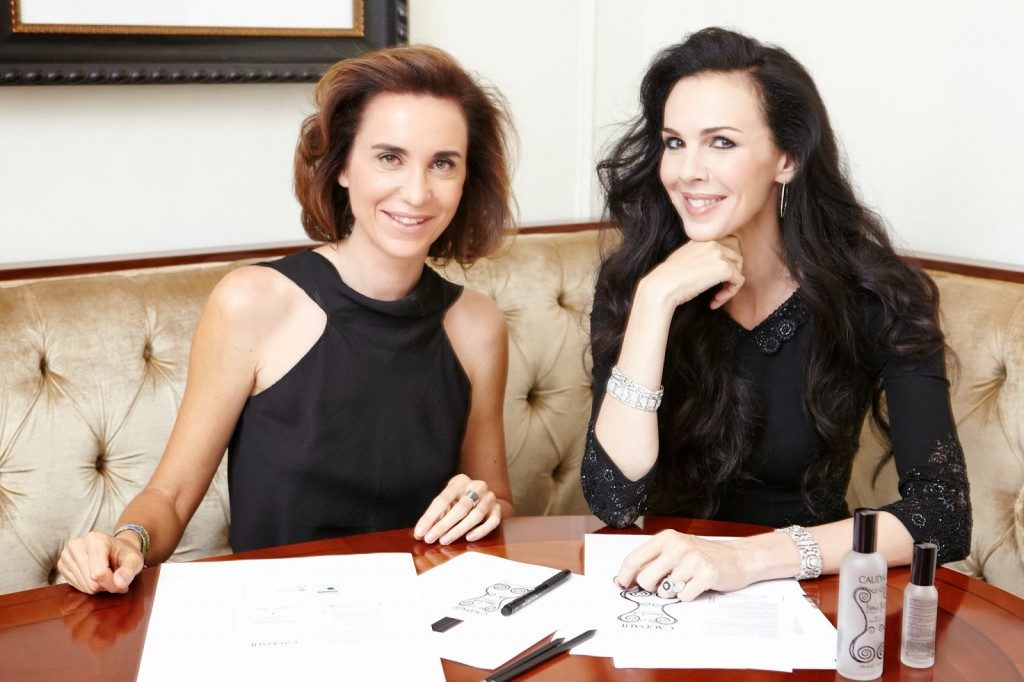 I was recently invited to the Caudalie Spa at the Plaza Hotel in New York City, to attend the launch of the Caudalie and L’Wren Scott collaboration. Caudalie and L’Wren Scott have teamed-up to bring you a special edition of the cult classic Beauty Elixir. While the formula remains the same, you are in for a special treat, as L’Wren takes the creative reigns and re-imagines the facade of the bottle.

Let me, first, give those of you who are not familiar with this amazing product a little background information on it. Beauty Elixir is a spray skin hydrant, which is part syrum and part toner. As a consumer, you would use this elixir to hydrate your face after washing it, to “set” your makeup after you finish your application, and to refreshen your face throughout the day. As a makeup artist, I use this spray after applying powder to the the face, which helps bring back the natural glow and sheen that is lost when setting makeup.

This spray is not just some “trumped-up” water either. According to Caudalie:

“Once upon a time, there was a book of spells found on the banks of the Seine, in Paris. Doctor Hertzog, who was renowned for his mesotherapy treatments, found a recipe in it for the youth elixir used by Queen Isabella of Hungary in the 17th century. It is said that she charmed the king of Poland, thirty-five years her junior, with her radiant complexion. The dermatologist entrusted his discovery to Mathilde Thomas, who was just launching Caudalie. In 1996, Beauty Elixir was born. And what is the recipe for this versatile natural cocktail? Benzoin to soothe the skin, myrrh to renew, rosemary essential oil to purify, lemon balm to calm and peppermint to stimulate, along with orange blossom to soften, rose for radiance and, of course, moisturizing grape pulp extract, Caudalie’s signature ingredient.”

Using this elixir is an exercise in luxury, let me tell you. When the atomizer releases the mist, you are greeted with the bright essence of peppermint and the pillow-soft sensation of cool water hugging your skin. Once the water has a moment to settle, a thin veil of grape pulp extract lingers as an indiscriminate barrier, holding all of that moisture inside of the skin and leaving behind a radiant glow.

Regarding the seemingly unusual pairing of a skincare expert and a fashion designer, the ladies had this to say:

“Beauty Elixir has close ties to the fashion world. You can find it backstage with makeup artists, in the models’ bags, and also in the front rows of some runway shows. It seemed obvious to me to ask a well-known designer to create this Collector’s Edition. I had read in the press several times that L’Wren used Beauty Elixir. And we shared the same attention to detail and artisanal approach” -Mathilde Thomas

“In January 2013, Mathilde contact me and we got together over a cup of tea. I was fascinated to learn the story behind this elixir, and I really liked her approach to beauty. Her offer was very tempting to me – and so was the idea of being able to give “my” bottle as a gift to my family and friends.” -L’Wren Scott

L’Wren worked on the design of the bottle at the same time as her 2013 fall collection, which was inspired by the Austrian painter, Gustav Kilmt. She borrowed the idea of mosaics and the feminine silhouette from her collection, and thus, the bottle was brought to fruition.

I urge those of you, who are looking to treat your skin, to give the Beauty Elixir a try. And if you happen to be in New York City, be sure to stop by the decadent Caudalie Vinothérapie® Spa at the Plaza Hotel.

You can also view this article over on World Bride Magazine’s blog! Check it out [HERE]