5 Challenges Black & POC Makeup Artists Have To Deal With

Being a makeup artist is generally an exhilarating and rewarding career path, but it also comes with a unique set of obstacles and annoyances when you are a person of color. While I could come up with a laundry-list of issues, I have decided to cover 5 of the most-pressing challenges.

[1] WTF Is An African-American Skin Tone?

What is that? No… seriously. What the fuck is that? Of the many ways one could classify complexions, I must say, using ethno-nationality is the stupidest, most impractical, most confusing method. I’m not really sure if the use of “African-American skin tones” was born of political correctness or ignorance, but I do know that it tells us absolutely nothing about the skin we are describing.

…or how about the fact that NONE of the people below are African-American?

“African-American” describes nationality. It refers to one’s ethnic heritage and citizenship. Nationality and ethnicity are not skin tones. Due to immigration, migration, slavery, one-night-stands while on vacation, and all kinds of other phenomena related to our nomadic existence as modern humans, you will find people of all colors in almost all nations. This is why you should not use social constructions to describe phenotypes.

A more accurate way of describing complexion is to refer to a skin’s tone, hue, and color. And I know some people are out there scratching their head. This is why a foundation in ART is integral to being a makeup artist. You can’t just be out here, in these streets, picking up brushes without a firm footing in the basics of your namesake: Makeup –> ARTIST. But if you need a refresher:

Tone refers to the lightness and darkness of a color.

Hue refers to the 12 colors of a primary, secondary, and tertiary inclusive color wheel.

Color is an exact. It is more specific than a hue. Burnt Sienna, Salmon, Brown, Blue-Black, etc… are colors. 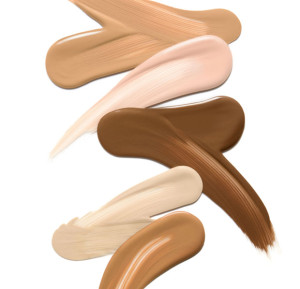 Use these categories to describe skin. If you are offering a segregated skin class (i.e. one that focuses on the complexions of people like Kelly Rowland and Grace Jones), you need to call that a class for DARK SKIN TONES. I don’t know what an African-American skin tone is, and neither should you. Protest that shit.

[2] Being Twice As Talented, But Hired Half As Often.

Yep. I already see the butt-cheeks clenching after reading that headline. This topic was somewhat touched-on in our national media when model, Nykor Paul, took to her Instagram page, exposing the disparity in white makeup artists’ ability to competently match the foundation they are applying on her face, to her actual complexion (or hell, to even HAVE foundation in her color!) 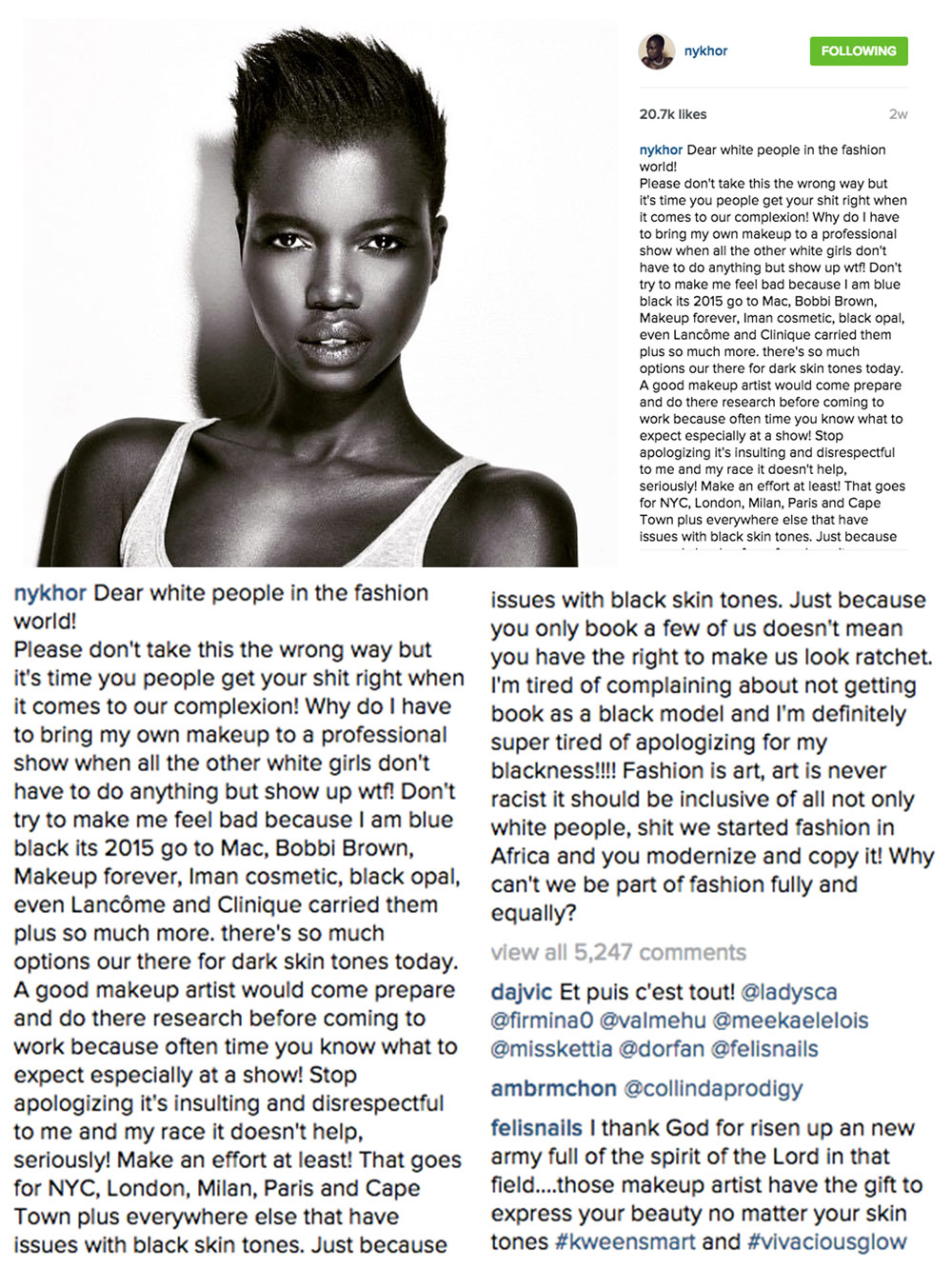 Hunny, when I tell you Nykhor was not in the mood for telling lies and protecting egos! Black and POC models, makeup artists, and hair stylists all over the globe let out a collective cheer when this shit hit the fan! This is an embarrassingly common occurrence in our industry.

But why is it? Why is it so prevalent, even at the highest tiers of the makeup industry? I want to be careful not to paint (no pun intended) every white makeup artist with the same brush. There are lots of qualified white makeup artists who are able to service anyone of any complexion just fine. But there are also lots who cannot. This predicament that Nykhor and I speak of is not isolated, or even rare.

This problem does not exist in a vacuum, however. There is a reason for the prevalence of white makeup artists who cannot service dark skin. Let’s look at America in 2015. 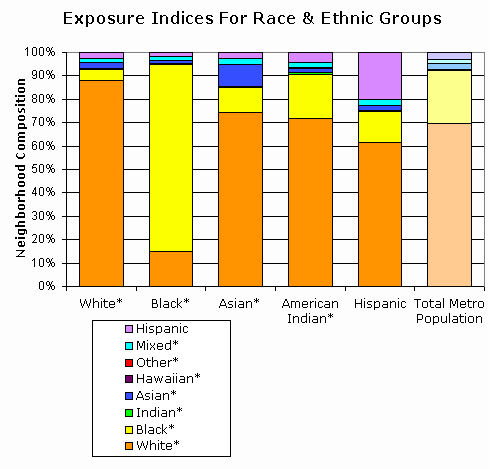 How does this manifest into disparities in makeup application ability? Easy. Think about how most of us learn our craft. The majority of us developed our talents by practicing on family and friends. White people will practice on other white people, and black people will practice on other black people. And when we move on to finally getting clientele, our clientele will likely mirror our social circle.

This most likely explains why white makeup artists are ill-equipped to handle dark complexions. I don’t believe these white makeup artists have racist INTENTIONS, but their inability to service black complexions does have a racist OUTCOME. Even if white makeup artists love black people, if they are not gaining the skills and buying the products to service black skin, it is resulting in a racist impact to those black clients. One group of people cannot receive qualified service, simply because of the color of their skin. This is racism. I know that will be hard for a lot of people to understand, because most Americans are raised to believe that racism is about ILL INTENTIONS, but it is not. You don’t have to dislike black people to perpetuate racism. Racism is about OUTCOMES. When your actions result in the exclusion of a group of people based on their skin color, you are participating in a racist ACTION. That doesn’t make YOU “a racist,” it just means that something you are doing (or not doing) is racist, and that you should make the necessary changes to end the racism. It’s not that hard!

This segregated existence does not yield the same limited skill set for black makeup artists. Quite the opposite, actually. Although we also live segregated lives, we have to work in a field that is dominated by white people. This means that while our family and friends will mostly be black, when we go to work, our models, actresses, news anchors, politicians, etc… are MOSTLY WHITE. In order for us to be a working artist, we HAVE to know how to do ALL complexions. The same is not true of white makeup artists. There are so few black models, actresses, politicians, etc… that it is entirely possible for a white makeup artist to seldom, if ever, have to work with a person of color… much less someone the complexion of Nykhor. I’ve seen plenty of white makeup artists fumble when they get a dark model in their chair, and the model gets up looking an ashy, dusty, Coco Montrese MESS!

And this racism extends into hiring practices of black and POC makeup artists. Because of institutional racism in America, we are still routinely denied jobs based on the color of our skin (people throwing away our resumes based on our “ethnic” names, determining our race based on our address/neighborhood, not hiring us because we wear afros or locs, etc…). This racist hiring climate results in a lot of under-qualified white artists being booked on jobs with black talent (such as Fashion Week runway shows), which they are not able to service… and black & POC artists who ARE qualified, are not booked at all.

← How To Get Your Tweezerman Tools Sharpened For Free!
5 Challenges Black & POC Makeup Artists Have To Deal With →